So Google has officially hooked up with HTC. How do I feel about this? Rather ambivalent, actually. On one side Google is already using their phones (Pixel), but HTC did roll over to Apple a long time ago without standing up to their bullying tactics – something that made me ditch HTC in favour of Samsung (and, tbh, I’m glad I did). However, this link up means Google gets a dedicated team to work on their phones. Whether this means they’ll become a decent competitor to the other devices, remains to be seen.

As you’re probably aware, I love to tinker with phones, especially Android ones, having been able to root several:

However, when trying to tinker with my dad’s S5, some really weird behaviour occurred. I first unlocked it using a SIM unlock code, and it started to randomly reboot. Regardless of whether or not you use an EE SIM or not (we tried EE, Virgin and Three SIMs — all were subject to the rebooting behaviour). So, I decided to take a change and rooted it and flashed Bobcat ROM (a ROM which I was running successfully on my own S5, which is the same model as my dad’s with the only difference being the network provider — I’m on Three, he’s on EE.)

The phone still randomly rebooted, so I turned on Logcat and tried to see if it recorded anything. No such luck.

So I tried a few different ROMs — Stock Samsung (Lollipop), Bobcat ROM, and Phoenix ROM. All still rebooted. So I took it to Samsung for their opinion. They said they couldn’t flash it because Knox was void (Knox is a warranty flag on Samsung devices which indicates whether you have custom flashed the device or not — I obviously have.) But they were nice enough to tell me that the behaviour described usually indicates the Firmware is wrong (which is something I didn’t flash).

After several months, I have upgraded my phone from an HTC Sensation to a Samsung Galaxy S5 and the first thing I did was root my G5, which surprisingly was VERY easy, just use ODIN and the ODIN tool. My HTC Wildfire S was super hard to root (had to use the XTC hardware tool), and now I have Titanium Back restoring my apps. I am considering flashing CFW, but I want to make sure I have a Nandroid-compatible recovery installed first.

I also have redownloaded Zombies, Run!, and I am going to try to catch up with the storyline from where I left off. My last mission was “Veronica” back in June (Mission 15), but I’m going to redo the entire Season 3 missions again to be sure.

Zombies, Run now supports (albeit at an experimental level) external media players (somewhat obsoleting my Google Music tutorial), but I haven’t tried this feature and it does note that by enabling this mode, ZR will not allow you to select music lists internally. Not that it matters to me right now, since I have loads of music stored locally on my device.

I am not impressed. After flashing and restoring my applications, the phone seems extra sluggish and seems to have locked me out of recovery mode. When I tried to set my alarm for weekdays, I was fighting the phone to click the days of the week. I was pressing Monday, Tuesday, Wednesday, then the phone took several seconds before showing up the change, then unticking them, and ticking them back on again.

I reflashed my recovery from 4EXT, since I could still get into the main OS, and now I’m reflashing from my image back to my albinoman build. This Flemmard build is going on my “do not use” list.

I am not impressed. After flashing and restoring my applications, the phone seems extra sluggish and seems to have locked me out of recovery mode.

Reflashing my phone again. Using Cyanogenmod again, this time, a different build. This build is V4.4.4 instead of V4.4.2 which is the one on the albinoman build. The build is also later than albinoman’s one, so might contain some fixes to problems encountered in V4.4.2.

So, I have been using the albinoman build of Cyanogenmod for a while now, and reflashing has fixed a few quirks, but I still get what appears to be a memory problem and the system interface restarts. So I’m going to later try reflashing a different build.

First flash is an unofficial version of Cyanogenmod 11. This is the version I currently have, but I’m doing a full reflash due to the problems I currently have, which I wonder if it is down to the fact I didn’t do a superwipe when switching between ROM variants.

Generally, you should wipe or superwipe your phone if you are moving from one ROM variant to another, and not wipe if you’re flashing an update to the currently installed ROM.

My experience of Carbon ROM has been short and a mixture of good and bad. Good in that there were some very nice features, but bad, in that the whole ROM seemed to not be too responsive. Less of a problem with Carbon ROM compared to the last one I tried, but, still, definitely noticeable.

I’ve taken a quick look at XDA and found a couple of other ROMs available, so I’m going to download them and give each one a go. 4Ext really helps with the backups.

After a lot of tinkering and configuring, I’ve got my HTC Sensation onto Android 4.4.2 (KitKat). The ROM is not registering updates so I’ll manually have to keep checking on the XDA forums.

I like the new interface changes, the sliding notification ribbon, and the way the whole thing seems to run quicker than Jelly Bean. Made some backups of the new versions of the apps, and installed the newer version of TWRP. I was right, and that I was behind by several releases.

The only thing that’s gone funny right now, is my local profile that is displayed on the interface is corrupted. Here’s my build screen: 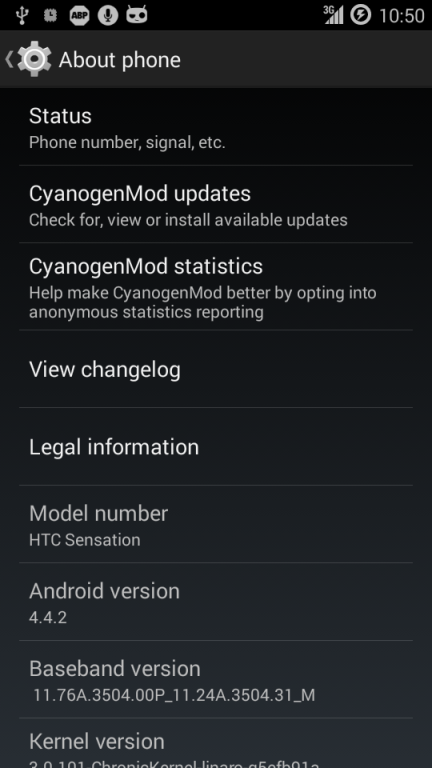