I commend this journalist for writing about this. It is a shame that deaths of family pets are not seen as the same as the same as family members, when to some – including blind people, they are more than just pets.

I used to own a cat myself, he disappeared one night and never returned. I never found out what happened to him – whether he was adopted or killed, and I guess I never will…

A few weeks ago I lost a close family member to cancer.

Although he had been had been ill for a while with a thyroid problem, until the morning of his death there was no indication that we were also dealing with incurable kidney cancer, nor that before the day was out we would have to say our goodbyes to him and would never see him again.

The family member’s name was Dave and he was just shy of his 15th birthday. He was, of course, not a human member of our family but a feline one (the picture above is a bit of giveaway). He was a valued and much-loved member of the family nonetheless.

Your regular, characterful-but-common-as-muck moggie, Dave was a cat it was hard to dislike. A big bruiser, people said he had the body of a boxer and the face of a rent boy.

Food obsessed, irascible and an ardent lover of warmth (we once found him curled up inside a duvet on a day when the thermometer hit 31C), he was also so ludicrously placid that you could pop him under your arm and squeeze him like bagpipes, or plonk him on your head and wear him like a deerstalker – something, I must admit, I occasionally did. Such was his docile demeanour that everyone from casual strangers to our cat-sitter and vet adored him.

When the end came, however, it came quickly. They day before his death he lay on the bed in the spare bedroom, listless, quiet and off his food. I knew the game was up when he even refused to eat a handful of prawns – his favourite treat.

The following day, a Saturday, he refused to eat again, eschewing food but lapping up water as if he hadn’t drunk for a week. So abnormal was his thirst – I’d only ever seen him drink from the water bowl about twice in 15 years – that we took him to the vet immediately.

On discovering his kidneys were enlarged, he was transferred to another local vets for investigations and by 4pm we’d had the news that he had cancer.

A few hours later, my partner and I were standing in a small treatment room having to make the heartbreaking decision to let him go.

My cat died, and it affected me as much as losing my dad – Telegraph. 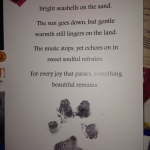 http://youtu.be/ESmeEAJ13VQ in case the video doesn’t show up